Hello? Is there anybody in there? Just nod if–No, this is a print medium, nodding would be stupid. Don’t be dumb, Pink Floyd. If you’re unsure if anyone is in there, how is nodding helping? Oh, right, drugs, it’s all a drug metaphor. (Already derailed into a useless tangent two sentences in. Yep, back in the saddle.)

Though my absence was met with a hollow thud and probably, amidst the swirling typhus vortex engulfing blogs that is the April A-to-Z Challenge, some of you would want to thank me for taking a brief hiatus, sparing you the eye pollution of another deluge of poorly thought out word-diarrhea. There are few reasons for my dipping out, but none more important than my welcoming a beautiful baby girl into the world. I’ve spent my life insulating myself against the world, hiding or protecting myself from rejection. Children never factored into my thought process regarding the future. All I could perceive is doom. A philosophy steeped in doubt, distrust, pessimism, and a very real fear of what the future holds for humanity as greed clouds rationality and urgency.

Since I’ve been married to my spouse, I’ve shifted my outlook. Instead of pulling into myself, imploding in cynicism, I’ve changed my mind. I’ve given myself over to hope and optimism. I’m choosing to believe in the endurance of idealism, comforted by the assurance of constant uncertainty. The writer Jonathan Hickman wrote, “I’ve learned that the difference between living and dying is managing fear. Not being so afraid of losing the things you love that you hold them too tight.” I wanted to put more love into this world, to expand, possibly through blinding arrogance, but it was and is a decision I made with the love of my life to not cling so tightly to ourselves and our relationship that we crushed or calcified what we have and instead be open to growing our love in new and, frankly, terrifying ways. This may seem like rambling post-justification, but it’s really my way of articulating all of the thought that went into turning me from perpetual childless servitude to my own ego (not that all childless people are as such, speaking for myself) toward creating a life dependent on my dumb ass. 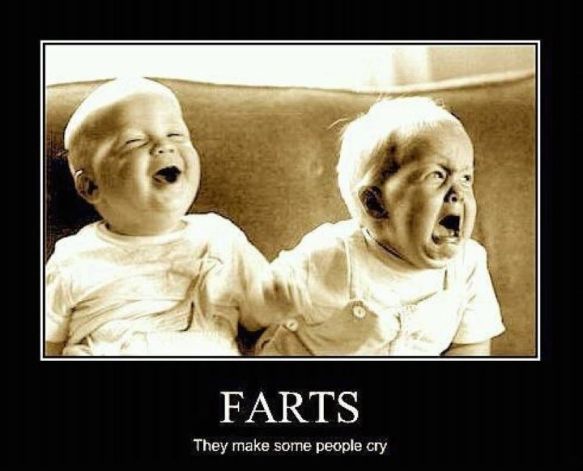 Creating new life has already taught my new things Most importantly, I learned that newborns can’t voluntarily smile until they are six weeks old. But I’ve seen my baby smile. Turns out that babies smile because of gas. It’s instinctual for the baby to get all grins when gassy. Farts bring smiles. It’s just natural.

(Aside: What? You didn’t think I could maintain that level of sincerity through an entire post, did you?)

To me, this proves that farts are instinctually, possibly evolutionarily funny. Don’t let anyone shame you for laughing at your own toots, because you can’t help it. Root for toots, I say, because farts are funny even to those who can’t speak or hold their own head upright. A foolish counter-argument could be made that as an adult, I shouldn’t be laughing at something so infantile that a baby finds it humorous, but I would counter-counter-argue that farts are the only thing that unites people across cultures and generations. Farts are uniters.