With the Earth–Sorry for the early digression, but isn’t it weird that we call dirt “earth” like it’s a lesser Earth, like the inadequacy issues that Michael Jordan’s son would feel on top of the already large issues he faces if Michael forced his son to spell his last name with a lowercase j. Where was I? Oh yeah, the beginning. With the Earth having tilted its axis to thrust the Northern hemisphere closer to the Sun, those of us forced to bake in the Sun’s cancerous rays are faced with Summer.

Once you become an adult, there are a lot of bummers to Summers. The built-in babysitter of school is out and the impulse-driven youth run rampant upon the earth (and Earth). This becomes increasingly concerning in the States when it coincides with the most popular celebration of explosions: the 4th of July. The availability and proliferation of fireworks creates an anxiety due to the ever-present danger posed by irresponsible children and drunks in possession of explosives. 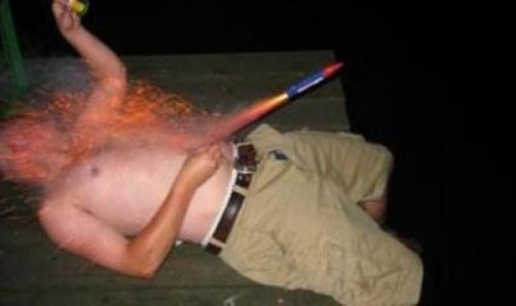 Preceding July 4th, in my neighborhood children with bottle rockets aiming their fireworks into the trees lining our streets (when they SHOULD be pointed at each other like responsible children–Did I mention I run an orphanage?). During the 4th of July celebration, people have been drinking all day to pre-party for boom-boom-stick handling, hence the deaths of two unmournable nimrods, one who launched a firework off his head, the other who used his chest as a launchpad. Don’t worry, that species isn’t endangered, we still have an overabundance of blisteringly stupid drunk dudes.

Now, for the week following Independence Day, neighborhoods across the country, already oppressed by the ozone-dissolved heat, are further plagued by the intermittent pops and kabooms of leftover fireworks.

“Hey guys, it’s Tuesday, you know those handful of tiny explosive things that make an unsatisfying-yet-loud boom sound that will serve nothing more than to annoy anyone over 25 and disturb pets? Let’s set those off at random intervals tonight, tomorrow, and until we run out of our arsonist-starter-kit supply? But, again, don’t waste them all tonight, maybe blow-up one tonight, then one tomorrow and another two hours after that one. This is how we live our life because we’re egocentric assholes. I’d call for a group high-five, but there’s not enough iPhones around to document it.”

I just heard three random firework pops. The 4th of July was on Saturday and this is Wednesday. The angry thoughts these sounds conjure lead me to wrongfully wish that each of those firework explosions resulted in a missing digit. Harsh? Yes, but these are garbage people. This is part of why I hate Summer. I will organize an intervention for those who are still, four days later, still setting off fireworks.