Santa is a magical entity, I get that. I’ll accept at face value that he’s able to assess who is naughty or nice and deliver presents around the globe. No problem there. Sure, he can break and enter into any home. He rides on a magical sleigh drawn by magical reindeer. No issues. Buuuuut living in a house with his wife, no kids, and a few thousand enslaved elves? I’m not saying Mrs. Claus (no first name ever given, by the way) is not living her best life, but she’s settled into a comfortable situation. 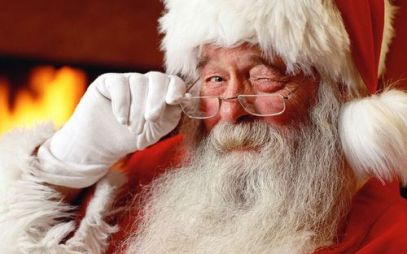 Santa Claus may be married to Mrs. Claus, but she’s his second beard. Dude is obviously married to his work. In order to monitor the billions of children, manage an elf sweat shop, and cultivate a stable of flying reindeer (that’s not the first and only Blitzen, this is a James Bond situation where we just trade out Blitzens every few years and just give ’em the same name), he has to be fully dedicated to his craft. He doesn’t have time to make Mrs. Claus glaze her cookie (possibly the grossest sentence I’ve ever written or thought).

No, he attends to Mrs. Claus with that toy factory of his.  Don’t believe me? You think Santa Claus and Mrs. Claus are decking the halls together? They have both let themselves go, but Santa is the most egregious. He is able to shimmy down any chimney, but still insists on maintaining his girth. He dresses like he’s signaling to the world but Mrs. Claus in particular, “Hi, I don’t want physical attention.” Those sweaty red robes are an armor guarding against any physical affection.

Everything about Santa is screaming, “I am not interested in body touching.” He has a scraggly beard that is definitely a guard against kissing. The hat alone is telling people he’s off the market. He setup his home in the coldest place on Earth. All of those sugary treats can’t be treating his intestinal tract kindly. He’s also weirdly obsessed with kids. Not in a pedophile way, but in a way that says, “I long for a time pre-puberty where there was no danger of sexual intimacy.”

This is not to impugn Santa. There’s nothing wrong with being a-sexual. It frees him up to accomplish more without all of those pesky sex thoughts (I saw Sex Thoughts open for Rush in 1989). It also means he can refer to his wife as Mrs. Claus without worrying if that’s a massive turn-off for her. That sexless aesthetic permeates all aspects of Christmas. There’s nothing sexy about Christmas. Even the song “Santa Baby” is gross. Be like Santa and keep it in your pants, everyone.

Merry Christmas everyone, or Merry Yule for my Pagan friends. Or Happy Monday for people who aren’t celebrating anything.