There are many personalities of drivers. These personalities drive your habits, motivate decisions and reactions. We all know this…unless you live somewhere with a robust public transportation system (stop bragging, you didn’t build it).

If you are in the passing lane, and aren’t passing anyone, you’re in the wrong lane.

It’s befuddling how people still don’t get that. What weird sense of pride do you have holding up the people behind you willing to speed? Are you some vigilante of the roadways slowing people down for justice? Move over.

Some people cannot stand the idea of someone getting in front of them.

We were sitting in traffic and changed lanes. There was at least five car lengths between us and the car we were merging in front of, yet this 18-wheeler started honking and flashing his brights. At first I thought there was something wrong with our car, but then someone else changed in front of the trucker and the trucker lost his mind again, and again, and again. Then there was someone going below speed limit in the aforementioned passing lane, when we changed lanes to pass on the right, the person sped way up. Then slowed down, then sped up, then slowed down, just so no one would get in front of him.

It’s like they wrap their feelings of masculinity in a Big Dog t-shirt. Whether that be changing lanes in front of them or speeding past them, these types will feel a deep sense of injustice that someone dare pass them.

On a road trip it’s hard to find a music station everyone agrees with, until you scan and scan across the dials for 10 minutes straight and just settle on whatever crappy classic rock station comes in as you’re coasting through the middle of nowhere and find yourself seriously contemplating the merits of 70’s and 80’s rock. So sorry, 80’s kids, not to yuck your yum, but Axel Rose’s singing voice is really annoying. He pronounces child as “Chee-yild.” Oh, and all people who work for radio stations: you’re not funny, stop trying, attempt sincerity instead.

The car ain’t the kind of place to raise a kid, in fact it’s cold as hell. 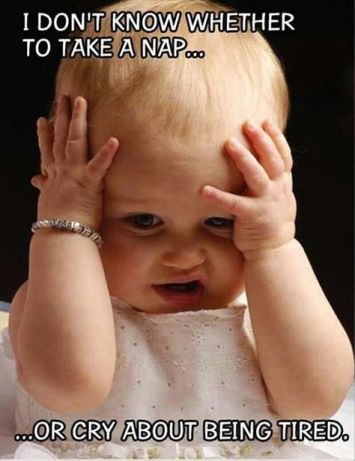 I cannot recommend driving 4.5 hours (stops not included) with a 20 month old. “Should we pull off?” “Where, to let her run around the Circle K?!? Give her more Cheerios!” “Do you still have that ether rag?”

I’m going to start a stereotype. I know it’s not fair. That said: Floridians are bad at driving.

Yes, I know about confirmation bias. I like Florida. I’ve only been to two cities, so my experience is limited, but I have had good experiences. It seems, however, whenever I have issue with a driver, that person is either on their phone or has Florida license plates. Not all Floridians, but enough that it’s noticeable. I’ve driven across the U.S. California, Nevada, New Mexico, Texas (from El Paso to Cut And Shoot), Louisiana, Mississippi, Alabama, all the hits. None of this Ohio nonsense, only the greats. And the biggest issue is Floridians. They drive like they they’re 80 years old but also just kidnapped a rambunctious toddler who enjoys the music of Limp Bizkit.

My biggest takeaway is, relax. Every car you see is not a maniac, it’s driven by a person, just like you, trying to get to wherever it is they want to go. We’re all just people, trying to get to our destination.