Today in the U.S. is Martin Luther King Jr. Day. A holiday in celebration of the life of one person who was bold enough to challenge the established order and say, “hey, uh, excuse me, would you mind treating everyone like human beings?” I’m paraphrasing. You may have heard his famous speech, “I have a dream that people won’t be complete assholes to one another.” Again, I paraphrase. He was rewarded for his efforts with a bullet in his head. So, after much resistance from racists and people who don’t know they’re racist but still make ignorantly racist statements like, “how come there’s not a White History Month,” we have set aside this day to celebrate Rev. King for having the temerity to hope people could live in harmony. 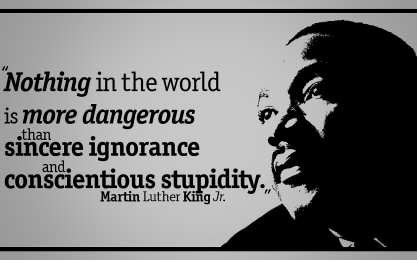 To him and the people who believe in his message, I say, Happy Martin Luther King Jr. Day!

No, wait, “happy” doesn’t seem like the right adjective. It doesn’t seem like a day set aside for a guy promoting racial equality should be considered “happy.” Especially when his work isn’t done, his dream is only partially manifest. “But we have a black president, racism is over,” says the person who apparently never been online or doesn’t understand that the black experience in the U.S. is drastically different from the white due to institutionalized racism. 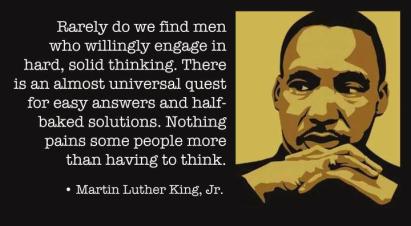 Maybe I should just stick with “happy.” He’d probably want people to be happy, but presumably not the type of people who led to his assassination. Happy for some, examine your pointlessly bigoted beliefs for others this Martin Luther King Jr. Day. (I recommend going here and reading or listening to just one of his speeches. His words still resonate.)