No, politician/pundit/dickhead, your idea is dumb and the only reason you’re saying that is because some lobby group is paying you an obscene amount of money. Admit it! Just admit you have no interest in climate change or gun regulations or abortion or tax laws or anything outside of your own self interest and you’re only pretending to because you get money for unsupportable non-ideas meant to preserve the status quo. Just admit it. 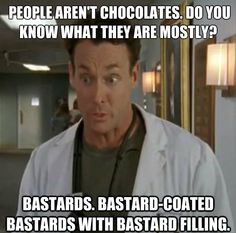 “We can’t reform our gun laws because that would encroach on our Second Amendment rights.” As much as I am confounded by how so many people can afford guns (they’re pretty expensive), I am equally confounded by people’s resistance to preventing guns from getting into the hands of religious extremists, toddlers and generally unhappy people. You like guns and want to keep your toys, that’s fine, there are other countries who said that they like their boom-boom good-times and manage to have policies that reduce the number of unhinged butt-faces who can get their hands on death sticks. It’s right there. Look up, U.S., Canada has plenty of guns but also has plenty of regulations on who can buy them. It seems to be working pretty well for Canadians not dying all the time from gun violence. The NRA doesn’t represent the will of the people, they’re a lobbying organization that represents people who make a disgusting amount of money manufacturing and selling fear.

“We shouldn’t act on ‘Climate Change’ because it’s a myth.” It’s right there, all the preponderance of evidence from a majority of scientists (all of the scientists that aren’t being paid directly from those profiting from fossil fuels). But okay, that still doesn’t convince you, even if you ignore all of the facts, there’s a better, more profitable way than fossil fuels. Look at Elon Musk. Dude is making a mint on alternative energy. It’s right there. Proof that there’s a better, more profitable way to do things.

There are other ways to get rich and be successful than to exploit the status quo. We should make like Steve Jobs and become hailed as geniuses by stealing other people’s good ideas! Why don’t governments do that? Why are we so resistant to the better way to govern? Oh, because massive profits are reaped by those with a vested interest in the current system. And we tolerate it. We accept, through rhetoric and misinformation and jingoistic nonsense and delusional exceptionalism that change would somehow be detrimental despite evidence to the contrary.

It’s right there. Yet, I can’t do anything about it except shout into the void.