This past Friday I got an eye exam. I haven’t gotten an eye exam in probably a decade. It turns out that my eyes are starting to fail like the rest of me. It all started going down hill after I had a baby. It’s like my body realized I had fulfilled my biological imperative and decided, “you’ve served your purpose, time to start the inevitable slow decay as you march toward death.” Or knowing me and my thought process, my cells were most likely a bit more pithy and mocking, “You’re useless now, buh-byyyyyyyeeeeee.

This was no more apparent than when I had my pupils dilated. For those of you who haven’t had this done, it’s when they pour some yellow goop into your eyes, then shine an annoying bright light into them, then pour some more gunk into them and give you some truly fashionable eye wear and take bets on whether or not you’ll be able to drive to work or home without causing a 20 car pileup.

Apparently optometry hasn’t advanced much since the 1800’s when the local barber would stick leaches on your retinas, remove your leg at the thigh because you had an ingrown toenail and then give you a gallon of whiskey if you were at least 8 years old. The majority of what the optometrist did to me was shine flashlights into my eyes and ask me to read progressively smaller letters with a paddle over my eyes. Then, when they were done splashing frog’s blood into my eyes and reciting incantations, the doctor just put that big thing on my face and flicked glasses in front of my eyes saying, “better or worse, number one or number two?” 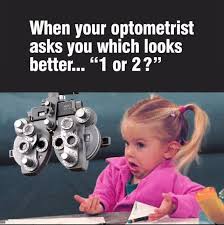 That’s the best they have, still. For all the advancements in modern medicine, optometry is shockingly reliant on you being honest in your self-reporting. We have the ability to edit genes and inject bad knees with the blood of freshly aborted babies (that’s how stem cells work, right?) but optometry is still sitting under neon lights asking you to read a poster on the wall. It’s like they had an optometry convention in 1964 where they all patted each other’s backs and chanted, “we nailed it.”

Possibly the worst moment of this was right after dilating my pupils using goo that looked and burned like what I imagine Johnny Depp’s ejaculation is at this point (minus 27 scarves and rings that also come out when he orgasms), when they led me to a darkened room and left me there. All alone I sat in the darkness, nothing to distract me from my thoughts, all set to a soundtrack of haunting music piping through their ancient speakers that I think they bought from a McDonald’s drive-through somewhere in Wyoming back in 1985. The music was barely audible but featured two women harmonizing in a spooky tone with the light tinkling of piano.

This ushered in a dark night of the soul wherein I contemplated my very existence and the rapid failing of my body. I pictured the cells in my body withering, turning brown, dying and floating down to my feet and I pictured this is how Gout is made. I thought of my child and her infinite potential, her body growing, experiencing changes as my own also experiences changes in the opposite direction. The hair thins, the belly rounds, joints inexplicably hurt. I’m a walking failure. Like a car with 100,000 miles on it, things just start to fail. I’m constantly surprised and grateful that as I walk, things aren’t just sloughing off of me. If I go a city block and my nails are still on me and I have a fully intact epidermis, it’s a victory.

It made me admire those who see a future beyond this meat-sack existence, who believe in an afterlife. If there is an afterlife, they better give me my 28 year old body, not this useless sock that I’ve been walking on for decades that has holes in it, stained by years of nasty sweat, that even a homeless person would would decline because of how funky it is.

So, thanks, optometrist, for reminding me of my hastening mortality. Maybe next time you can point out how quickly my ear hair is growing while conversely measuring the growth of my forehead and compelling me to diagnose the sulfur content of my own farts, ya useless doom sayers. Also, what was the point of the rectal exam?